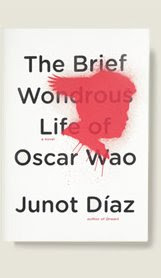 My recap of our Oscar Wao meeting - including the author talk - is now up at ReadingGroupGuides.com. I included some of the topics covered by the author, Junot Diaz, in his talk, as well as the topics we discussed afterward.

Here's the link - I hope you'll go read it and post a comment!
Posted by Heather J. @ TLC Book Tours No comments:

The Brief Wondrous Life of Oscar Wao, by Junot Diaz, was nominated by Beth. We had a very small group for the Junot Diaz author event but the four of us who did attend had a lovely time. Here are a few thoughts from the afternoon.
So far I know of 7 people who read/rated the book. If you have read but have not sent me your rating, I'll be happy to add it here once I hear from you. Here's what we've got:
That gives us an average of 6.4.

A few people gave explanations for their ratings or shared comments about the book:
I'll be posting some video clips on my blog within the next few days - I'll come back and add a link here when they are up.

To learn more about Junot Diaz and this book, check out the following links: