This month we read THE HELP, by Kathryn Stockett. Both Nancy and Bev nominated this book and it got lots of votes in our last round of book picking.

One of the first things we discussed was how popular this book is right now. Many members were surprised at how many times they were approached while they were reading/carrying the book in public – it seems that everyone has either read it or wants to read it.

The two characters who were favorites with the group were Aibileen and Miss Cecilia. Many of us hoped for more from Cecilia’s storyline but felt that she was incredibly well written. And there wasn’t a single one of us who didn’t love Aibileen. The least favorite character was Hilly (she was so believable and we all hated her) followed by Miss Lefolt (for her lack of care for her daughter and her “wishy-washy-ness”).

Part of our discussion focused on racism in different parts of the county. In general racism is visually prevalent in the South and more of an undercurrent in the North, at least in our combined experiences. We also discussed the current trend of racism toward people of Hispanic and Middle Eastern descent.

As you can tell from the votes below, most of the group really enjoyed this book. We agreed that it wasn’t perfect but that it had many excellent qualities. One thing that didn’t sit well with us is how “safe” everyone seemed to be, despite the dangerous nature of their actions; most of us were expecting something horrible to happen to at least one of the characters.
With 8 ratings, we get an average of 7.9 for this book.

Thanks to Melissa for hosting at her church and to Nancy & Beth for preparing for and running the meeting. Our next book is THREE CUPS OF TEA, by Greg Mortenson, and we’ll be meeting at Reynold’s Tavern for high tea.
Posted by Heather J. @ TLC Book Tours No comments: 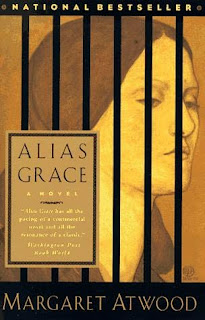 This month our book was ALIAS GRACE, by Margaret Atwood. Jennifer nominated this book after having it recommended strongly by her sister.

For the meal Jennifer suggested “comfort foods” – things that would make us feel better if we were in prison. Offerings included potato soup, cheesy bread, sausage/spinach bread, chocolate chip cookie pie, ice cream, and wine. It was all delicious!

This book definitely gave us a lot to talk about. The 6 of us at the meeting all really enjoyed reading it. The two members who didn’t like it couldn’t be there, which is unfortunate as we would have loved to hear their opinions.

Our discussion included:
We welcomed a new member this month as well. Lissa is a friend of Melissa and we're thrilled to have her join us.

Ratings:
This gives us an average rating of 8.


Next Time: We're meeting on 3/20 to discuss THE HELP, by Kathryn Stockett.
Posted by Heather J. @ TLC Book Tours 2 comments:

I forgot to post this back in January, sorry!

This month we read HALF BROKE HORSES, by Jeannette Walls. Kelli suggested this book because we had all enjoyed Walls' THE GLASS CASTLE a while back. Unfortunately this one didn't live up to our expectations. We agreed that it wasn't a bad book, it just didn't compare at all to her first book.

Here are the guidelines we've adopted to help strengthen and grow our club:
These decisions were based on the emails I received when I asked for suggestions, the discussion at our January meeting, and input from all our current members. Hopefully these guidelines will give everyone more ownership of the club and spread the responsibilities more evenly.
Posted by Heather J. @ TLC Book Tours 1 comment: